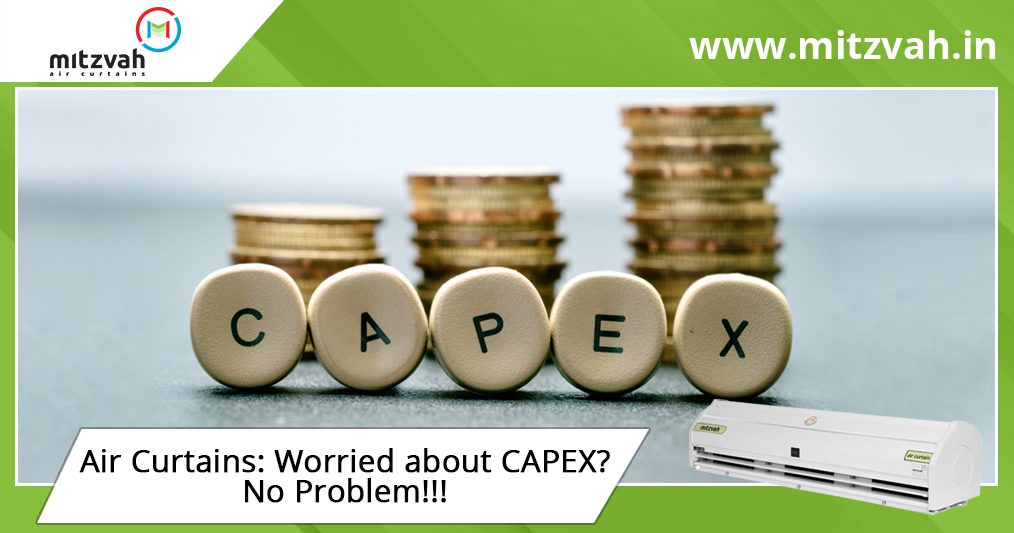 The protective barrier provided by Mitzvah Air Curtains keep harmful chemicals away from your valuable products and machinery. This reduction in pollution reduces the wear and tear of parts and other useful machinery and maintains the quality of your product.

If you are worried about Capital expenditure, No problem Mitzvah is here:

The payback period is the time it takes to recoup the cost of an investment. Simply put, it is the period of time it takes for an investment to reach its limit. Air curtains construction and energy saving feature, result in a very fast payback period of up to 6 months in air conditioning systems and as little as 4 months in hot oven applications. The quantity of payback varies based on the place and context of use.

i. Payback in a less busy area

The air curtains help to maintain the barrier that separates the outside and inside environments, therefore keeping the temperature stable. And, since there is less movement in areas like offices, shops, and personal spaces, the payback period is quite short and can be easily verified before and after 4 months.

ii. Payback at a place with moderate movements

Payback assumes the above-mentioned estimate, which shows that an air curtain saves on average Rs 7/minute, so a big store or major shop on average works 8–10 hours a day and 26 days a month (Sunday closed). The monthly savings will be roughly Rs 12,000, for a total savings of Rs 60,000 in 5 months.

iii. Payback in locations where there is constant movement

Wherever there is constant movement, the air curtains have to work hard and forever to maintain a consistent air temperature. As a consequence, with continued usage, it will use more power and, as a result, the investment can be restored in less than 6 months. Mechanical components may wear and deteriorate with prolonged use, resulting in increased costs.

Capital expenditures, or “CapEx,” is the sum of money spent by a company to purchase, upgrade, and maintain physical assets such as land, buildings, plants, and equipment. The main goals are to protect the company’s assets and keep the cash flow positive. So, in this case, the air curtain does the things that are needed in a more efficient manner. Air curtain has been called a “cash cow” for any business because it brings in a lot of money over time for a small initial investment. With a payback period of only four to six months, it has no effect on costs but does lower BTL by lowering operational expenses and increasing margin.

i. Air Curtain in Itself is a cash cow with low investment and high returns.
ii. With a payback period of just 4-6 months, It has no effect on costing rather it lowers the BTL, by lowering the operational cost and hence increasing the margin.
iii. Thus money invested in CAPEX will give a reduction in operational cost.

By avoiding leakage of conditioned air and keeping the mosquitoes and flies away, mitzvah air curtains help increase the comfort level of both external customers and internal employees. A comfortable environment and satisfied employees result in increasing the overall business efficiency.