An air curtain, also known as an air cutter and air door, is a machine that blows a controlled airflow across an opening to the other side to create an airtight seal. This seal separates different environments while allowing for a smooth, uninterrupted flow of traffic and unobstructed views through openings. In this blog, we discuss misconceptions about air curtains price.

Consider the following factors when deciding on an air curtain:

The following are some common misconceptions regarding the air curtains price:

There is a widespread misconception that all air curtains of the same size and length should have the same cost. This is not the case. On the other hand, the price is not so much determined by the external components as it is by the internal ones. In addition, there are two distinct varieties of air curtains: those that are heated electrically and those that are not. Additionally, the electrical one is the more expensive option.

This is a completely false notion that has been passed down from generation to generation, as the cost of the air curtain depends entirely on its dimensions. It is not true that standard or domestic air curtains are the same sizes as commercial grade air curtains because commercial grade air curtains are larger. The construction of the self-supporting casing, which ought to be done using galvanized steel plate, is what establishes the price of the item. A filtering capability ought to be built into the inlet valve. Because of this, there is no longer a requirement for any additional maintenance or pre-filtering to be done. The use of double-inlet centrifugal fans, which are powered by an external motor and generate very little noise, drives up the cost of the product significantly. And perhaps most importantly, those air curtains with a rating of 5 stars help in reducing energy consumption, which results in them being comparably more expensive than air curtains with lower ratings.

In India, there is a widespread misconception that the higher the cost of an item, the more beneficial it will be. The truth is that each curtain is made to order in accordance with the space, the customer’s requirements, and the intended purpose. In addition, the cost of installing commercial air curtains in a residential or community grocery store would be excessively excessive. Why would you spend that much money on an air curtain when you could get one that is significantly cheaper?

There are 3 Common misconceptions about Air Curtains Price

This is the most common feature that every air curtain possesses it is a device that uses a fan to force a curtain of air downward known as an air curtain. The forced air creates an invisible barrier that prevents warm or cool air from entering a doorway or building through an opening, thereby aiding in temperature regulation. Air curtains are also used to prevent insects, dust, pollen, and other contaminants from entering an interior space.

However, the original use of the Air curtain is primarily determined by the location and function of its use. And, in terms of function, air curtains are available in a variety of styles, each with its own set of capabilities.

Velocity refers to the speed of the motor and then the fan, but apart from this, the main characteristic of the Air Curtain is how much nominal Airflow it produces which is in m3/h. The low-pressure air curtain produces nominal airflow ranging from 1700-3200 m3/h and the High pressure (commercial purpose) air curtain produces the nominal airflow ranging from 1800-7200 m3/h. In order to achieve such airflow the amount of energy consumption is also important. More efficiency and less consumption are the other parameters to check the quality of the air curtains. Apart from the velocity, a good quality air curtain produces minimal noise.

A fan is a powered machine that circulates air. A fan is a rotating arrangement of vanes or blades that act on the air and are typically made of wood, plastic, or metal. An impeller, rotor, or runner is a rotating assembly of blades and a hub.

Whereas an air curtain is a fan-powered device that creates an invisible air barrier over a doorway to effectively separate two environments while allowing people and vehicles to pass through.

Difference between a fan and an air curtain: 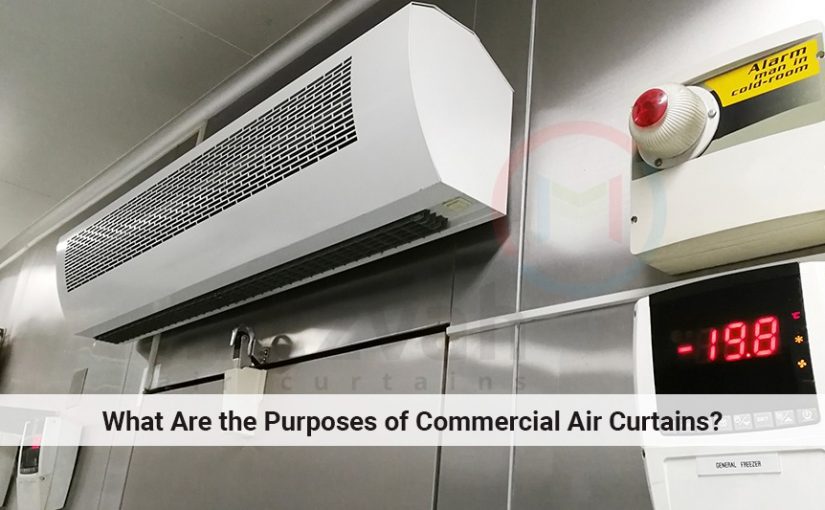 Air curtains are used in varied ways for different purposes and majorly took the market in the industrial and commercial sites. But before engaging in our core topic let’s understand what is air curtain.
So, it is a fan-powered device that creates an invisible air barrier over the doorway in order to separate two different environments, without limiting the access of the people or vehicles. 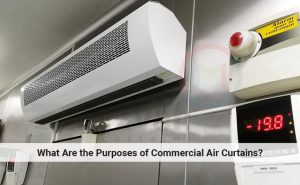 In modern times, it has become essential for commercial enterprises to provide the best infrastructure. For this to happen, commercial building owners are moving towards installing automated and advanced machines that are operated via automated functioning and other types of equipment that are important to be placed in commercial spaces. In times like now, such as the pandemic, it has become very common for people to shift to a completely automated and protected environment. Commercial air curtain keeps surroundings clean and dust-free. Nowadays every organization preferred air curtains in industries, offices & commercial buildings.

Companies and big organizations are now adhering to international safety and hygiene standards and for which they are installing devices such as automatic hand dryers, automatic soap dispensers, air purifiers, air curtains, and more. Air curtains are gaining popularity amongst Indian companies and people.

However, there is a difference in the types of air curtains used in different places, thus, before you choose to buy air curtain must check the usage. It is ideal for most of the commercial entrances put up to 2,8 meters high and must be a small and compact air curtain of elegant and friendly design with rounded shape and edges. Its external casing should be customizable adapting to the internal aesthetics of any premises. Air curtain must include a wall-mounted regulation system with remote control.

Commercial profitability: It is known that Sales increase due to the “open door effect”. It is known that when doors are open, people’s affluence increases substantially. The doorway acts as a shop window and allows people to see the inside of the shop. It increases customer and staff comfort.

Hygienic and healthy atmosphere: it helps maintain an adequate and healthy environment leading to reduces employee absenteeism. It does pest and insect control and works as a barrier against airborne dust, pollution, fumes, and bad odors

Increased safety: This product increases visibility and avoids collisions because there isn’t a physical obstruction. In cold rooms, it reduces misting, dries out the doorway, and prevents ice from forming on floors. Easy evacuation through the exit doorway in case of fire or emergency and act as a barrier against fire smoke.

Mitzvah provides you with the best air curtains aiming to give you every purpose and support through the product. Our service brings our excellence and makes us achieve our primary objective, customer satisfaction! So, head to Mitzvah as we give the best Air curtain price along with the genuine product.